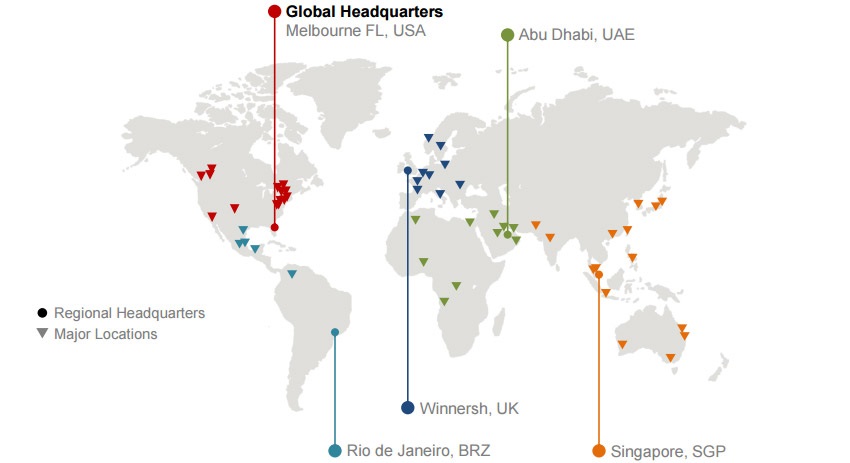 I just wanted to highlight one of the new companies in the area, the company that bought ITT is now HARRIS, I’m happy to say I am glad that a company like this had moved right into our back yard and we are already starting to help employees relocate to the area. Here is a little bit about the HARRIS corporation.

During its 120-year history, Harris has transformed communications and information technology. From day one, we have focused on providing innovative, reliable solutions that connect, inform and protect the world.
Founded on a Forward Leap in Communications Technology
Alfred and Charles Harris created Harris Corporation in the 1890s. The brothers ran a jewelry store in Niles, Ohio, while they tinkered with a variety of new gadgets.

Their first successful invention was an automatic sheet feeder which eliminated the laborious job of hand-feeding printing presses. The feeder was so advanced that the brothers developed a new printing press to accommodate it. The press was also revolutionary, delivering 10 times what a pressman could feed by hand.
Contact Us
CHQ General Contact Form
Files
Harris Fact Sheet 2016

Based on these innovations, The Harris Automatic Press Company incorporated on Dec. 23, 1895. The company went on to produce many printing innovations during the early 1900s. By midcentury, the company grew into one of the world’s largest and most successful manufacturers of printing equipment under a new name: Harris-Seybold.

Moving Into the Space Age
Harris-Seybold continued to grow and evolve. In 1957, the company merged with Intertype Corporation, a world leader in typesetting equipment. As electronic communication began to rise, Harris-Intertype began its transition into the Space Age.

The company’s transformation to a pure electronics business began in 1967 with the addition of broadcasting and microwave communications capabilities. That year, Harris-Intertype acquired Radiation Inc., a manufacturer of space and military technology located in Melbourne, Florida, just south of Cape Canaveral.

Radiation was a premier developer of miniaturized electronic tracking and pulse code technologies for America’s fledgling space program. The nation’s first communication and weather satellites—and the military’s various missile systems—used its products. Radiation products were also used in the first manned space flights and the Apollo missions to the moon.

In 1974, the company changed its name to Harris Corporation. Four years later, Harris moved its headquarters from Cleveland, Ohio, to Melbourne. By the time of its centennial celebration in 1995, Harris had emerged as a global company serving a broad base of communications and information technology markets.

In 2015, the company acquired Exelis. The acquisition transformed Harris into a company with greater scale, capabilities, core franchises and a more balanced business portfolio. The combined company has a broad portfolio of advanced, technology-based solutions to solve government and commercial customers’ mission critical challenges.

Today, Harris is one of the only companies concentrated exclusively on developing the trusted solutions that solve the toughest technology challenges faced by businesses and governments around the world.